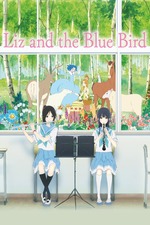 You can chart the course of my life over the last three years with my reviews of this movie. There have been significant ups and downs – mostly downs – represented by my periodic encounters with Liz and the Blue Bird, and once again I am simultaneously celebrating Naoko Yamada’s birthday by rewatching the movie and using this review as another diary entry.

A lot changed in the year that passed after my last viewing of Liz. Yamada’s departure from Kyoto Animation was officially announced, her next work (the Science SARU-animated Heike Monogatari) aired in full, and a number of former KyoAni staff showed up to help her. It was uncovered (though not formally confirmed, I think) that she had also directed the OPs for season 2 of Kaguya-sama and Visual Prison under a pseudonym. Meanwhile, back at the farm, KyoAni made a stupendous and legendary return to form; Violet Evergarden: The Movie hit Western cinemas and resulted in some of my most meaningful theatrical experiences to date, and Dragon Maid S brought the studio back to television with an impossibly beautiful follow-up to one of its best shows. The once-fantastical and soon-to-be-released Munto box set will allow us the opportunity to see some of Yamada’s earliest credits, previously locked away from Western fans. Oh, and I guess they still are, since Munto isn’t being released outside Japan. The episodes are on KyoAni’s YouTube channel; you just have to bring your own subtitles.

I loved Heike Monogatari, Yamada’s new series, and was immensely heartened to see not only Kensuke Ushio and Reiko Yoshida but several former KyoAni animators coming to collaborate on the show, and everything that KyoAni has done since the arson has proven that they are every bit the exemplary industry leaders that they always were, in spite of everything. Things are quite different now, though, and it’s still difficult to think of Yamada and KyoAni as separate entities: two forces that for a whole decade seemed inextricable and overlapping, now diverging. And she was not the only talented veteran who left; the studio is rebuilding, and that means all kinds of change. It all makes Liz and the Blue Bird seem like a kind of last hurrah, in retrospect; the last Euphonium movie was still to screen and Tsurune still to air after Liz, and the first Violet Evergarden film was also completed just before the arson, but Liz was truly the apex of KyoAni. If you ask me, of course, it’s the apex of cinema. It is hard to imagine the next installments of Euphonium being handled without Yamada and it’s hard to imagine Yamada working without so many of her mentors, students, and colleagues. It would be one thing if she had simply left after a comfortable career and decided to seek other artistic outlets, but this is a future that never should have been, and that will always cast a tragic pallor on the sundering of this perfect relationship.

This continues to be my favorite movie. I’m deeply grateful that Yamada has been able to come back to work and that she created such a marvelous new masterpiece in Heike Monogatari. Still, watching Liz is different now.