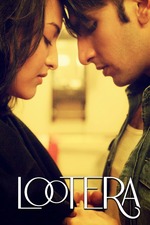 A moving painting on wheels.
Vikramaditya Motwane has directed couple of my favourite Hindi Films of all time. Lootera is at the pinnacle of them all.
This film captures the true meaning, the true essence of what love is, how big a life altering event it is, how deep are it's impact. To the core it has no limits, no boundaries. It makes you reach out and do the impossible at times.
It's surreal. Just like this film.
I don't really know anymore about how many times I've seen this film, I have almost grown up with it. People who really understand how good a film this is are a class apart. This Film NEEDS YOUR ATTENTION or you need this film vice versa. It's on NETFLIX or Torrent suit yourself 😂but do watch it.

Fun fact: This film was adapted from a short story "The Last Leaf" by O. Henry which was taught to me back in the day when I was in high school English. The moment I read it, I realised the film was based on this story. Just another petty moment of joy that was.